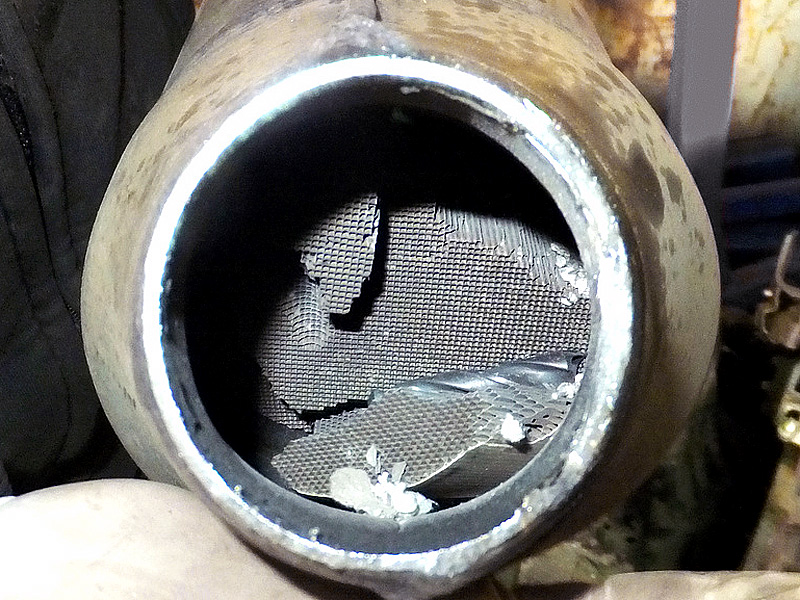 The Life Span of an average Catalytic Convertor is between 120000 to 160000km depending on the daily drive of the vehicle and the maintenance of the engine.  A well-tuned vehicle that does not burn oil or fuel will be much easier on a Catalytic Convertor.  As with most Automotive repairs “It’s Not the Years, it’s the Milage!” – Dr. Henry Jones.

Since there are no moving parts on a catalytic converter, you would expect that they would be fairly durable and long-lasting and they are but, in spite of all of the advancements in catalytic converter technology, they still fail.  We install replacement Catalytic Convertors. Many times, catalytic converter failure is a symptom of an issue somewhere else in the vehicle.

If your factory-installed catalytic converter needs to be replaced, one of the problems below most likely contributed to its failure.

The often-overlooked cause of exhaust damage.   The catalyst honeycomb inside of a catalytic converter is made up of a lightweight, thin-walled, fragile ceramic material. It is wrapped in a dense, insulation mat. This mat holds the catalyst in place and provides some protection against damage. However, broken exhaust hangers, off-road driving, potholes, speed bumps, or any impacts underneath your vehicle can strike the catalytic converter causing a catalyst fracture. Once the ceramic honeycomb is fractured, the broken pieces rattle around breaking up into smaller pieces. As a result, exhaust flow is interrupted and backpressure in the exhaust system increases leading to heat buildup and loss of power. Corrosion, thermal shock, metal fatigue, stress fractures, and stripped oxygen sensor threads are some other issues that may require you to need a replacement catalytic converter.

Engines in need of service and older engines that burn oil due to worn cylinder walls, stuck rings, and worn valve guides will produce by-products that can foul the converter. When an engine is operating outside of the proper specifications, wear and damage may be caused to the catalytic converter as well as the engine itself. Incorrect air/fuel mixture, incorrect timing, or misfiring spark plugs could lead to a catalytic converter failure or worse. At Putney’s we can diagnose and perform minor to major engine services.

Spark plugs that don’t fire or misfire force unburned fuel into the exhaust system. Because the catalytic converter gets very hot, this unburned fuel can ignite inside the converter and could result in a partial or complete meltdown of the ceramic catalyst.  Just because the OEM tells you that your vehicle doesn’t need them for 100000km doesn’t mean it is good for your engine to ignore them.  Have Putney’s check them today.

When oil or antifreeze makes its way into your exhaust system creates a thick carbon and soot which coats and eventually clogs the air passages in the converter’s ceramic honeycomb catalyst. This causes two separate problems. First, these carbon deposits stop the catalytic converter from doing its job of removing harmful emissions in the exhaust flow. Second, When the pores become clogged in the ceramic catalyst, exhaust flow is restricted which increases backpressure. This results in heat and exhaust backing up inside the engine. The excess back pressure created can actually cause internal engine damage. Your engine can actually pull burnt exhaust gasses back into the combustion chambers and reduce the efficiency of the next burn cycle and creating a loss of power and overheating of engine components. Worn out piston rings, failing gaskets, faulty valve seals or even warped engine components are all possible causes of this problem.

Ideally, the fuel that powers your vehicle is burnt up in the combustion chamber. Any fuel that gets through the combustion chamber unburned enters the exhaust system and can ignite once it reaches the catalytic converter. This can overheat the converter far beyond its normal operating limit. and cause a Melt Down. Possible causes are an improper fuel mixture, incorrect timing, bad spark plugs, a malfunctioning oxygen sensor, sticking float, defective fuel injector, or a faulty check valve.

If your oxygen sensor is not functioning properly it can send incorrect readings of exhaust gasses to the vehicle’s computer. The faulty sensor readings can result in an improper (too rich or too lean) fuel mixture condition. Too rich and the catalyst can meltdown from fuel-burning inside the converter. Too lean and the converter will not be able to serve its purpose changing hydrocarbons into safe elements. This may cause your vehicle to fail the emissions test during the annual State Vehicle Inspection.  A proper scan and testing of the O2 Sensor efficacy will quickly identify problem sensors.  Putney’s has trained techs and all the equipment to perform this task.

In the end, replacing the Catalytic Convertor is a good investment in your vehicle and in the environment.

Call Us Today 905-523-7535 to schedule our Bumper to Bumper Inspection of your vehicle and let us show you how we can keep you rolling for years to come!

Ask About our Digital Vehicle Inspections!

We can send a Visual Report right to your Smart Device.  It’s like being under your vehicle without getting dirty!